Paranormal, ESP, in the movies

I was wondering what others might list as some of their favorite fictional presentations of ESP (and associated paranormal stuff) in the movies. I like the stuff that Professor X and Jean Gray do in the X-Men movies (and I suppose Magneto would be kind of like Uri Geller on steroids). Spock doing the Vulcan Mind Meld is pretty cool. "The Sixth Sense" was entertaining. I thought "The Dead Zone" with Christopher Walken was pretty cool.

'Scanners' - with Michael ironsides - the head explode sequence is genius

Phenomeon - with john travolta - get the tissues ready
no - i mean crying....lol

Outstanding PK from the dead, the living and the possessed.

Enjoyed this after taking a wrong turning in the cinema accidentally with girl-friend (was expecting a family comedy, until the title role came up on screen, kinda put a stop to any petting - true!) The Heretic (1977) http://www.imdb.com/title/tt0076009/

One of my favorite X-files episodes was about ESP.

In it a psychic played by Peter Boyle (the grandfather on Raymond), a humble I'd-rather-not-be-psychic psychic portrayed against the Amazing Yappi, a stage psychic, as they solve a series of crimes/mysteries. Scully gets turfed from a session for being a skeptic but learns a lesson in the end. (Or was it Mulder that got kicked out?)
Made some interesting points about trying to interpret data

I also thought Stephen King's "Firestarter" was interesting as it speculates on government involvement in trying to manipulate mental capacities (with LSD, no less). A little dated now, but a fun book/movie, anyway.
D

Perfect example of the quintessential idiot savant, he lives in the matrix. That is a good one Eric.
E

Perfect example of the quintessential idiot savant, he lives in the matrix. That is a good one Eric.
Click to expand...

Based on a novel by Steven Gould Ã‚Â :
Except from Gould blog

Those of you who follow industry press may already be aware that my first novel, Jumper, and its sequel, Reflex, are being made into a movie. And not just any movie, but a summer (2007) action spectacular directed by Doug Liman, director of The Bourne Identity, Ã‚Â  Ã‚Â Swingers, Ã‚Â  Ã‚Â Go, and Mr. and Mrs. Smith.

I've known about this since early November of 2005 and it was finalized in mid-December. As you can see from the public record, the first screenplay was written by David Goyer, who wrote the screenplays for Batman Begins, and the three Blade movies. Jim Uhls, screenwriter of Fight Club is doing a rewrite. The begin shooting this Spring.

This is the literary equivalent of winning the lottery. While one does have to write a book (and hopefully a good one) to buy a ticket, it's still blind, dumb luck--the juxtaposition of many miracles. It also would never have happened without the unceasing efforts of my agent, Ralph Vincinanza, who has flogged it unceasingly to Hollywood for the last ten years. 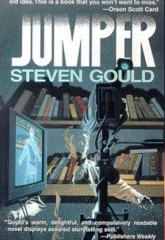 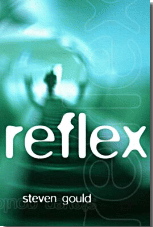 Deciding he has finally had enough abuse from his drunken father and is now determined to get away--any way he can--Davy discovers that he has the ability to teleport anywhere he wants. So he "jumps" to New York City. But next he finds himself desperately short on cash, so he "jumps" into a bank vault. While living the high life in the Big City and testing the limits of his power, Davey makes another startling discovery--the mother whom he thought had abandoned him.

But a new tragedy and other events plunge Davy into a dangerous and mysterious world of terrorists and government espionage. This time there may be no safe place for "the Jumper."

"An exceptionally well-organized debut, with thoughtful ideas, a controlled plot, and characters-particularly the young protagonist-portrayed with insight and compassion."-Kirkus Reviews on Jumper

"Jumper gives us the best of both worlds: a smashing adventure story that grows from a wonderful novel of character."-Bruce Coville

When i was a kid it was the newly wed game.. it show s how un perceptive people are. At making a so called life commitments...

They should have more shows like that !
That exploit how stupid people are to each other..
(unperception is a thing..)
Either people just dont care what others percieve about them..and why dont they even try? to percieve what other s are feeling?

Ill have to say THE SHINING the 2nd version.. was the best..
the 1st one was good but the 2nd one was better..
T

Wow ! just saw the jumper trl...impressive..cant wait for that one..!!
P

The Time Travelers Wife by Audrey Niffenegger......out as a film in 2008,if it translates to film anything like as good as the book....it,ll be great!!!
T

The Time Travelers Wife by Audrey Niffenegger......out as a film in 2008,if it translates to film anything like as good as the book....it,ll be great!!!
Click to expand...

That book has been sitting in my room for the past 2 months
Just havent got round to reading it. Its had very good reviews
Iam sure the film will be just as good.

What do you guys make of the hit series Journeyman ?
I think its the most intelligent series in its genre dealing with
time travel. Cant wait for the next series.

Really like the journeyman..episodes...
after watching a few episodes tho...
sorta reminds me of quantum leap
with the fix the thing that is wrong or going wrong, repair the time rift..sorta theme...but its still kewl....
S

Went and seen the Movie 'Jumper' !!