You know its very weird, many predicted this rocket would malfunction before
reaching its destination due to rumours Phobos maybe an artificial object.

It appears anything from Earth going near that 'rock' always ends up destroyed
for one reason or another. 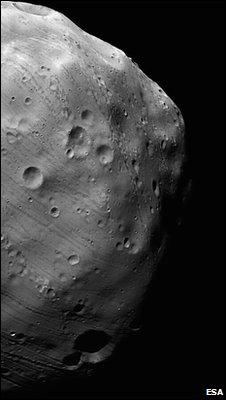 I'll spill on what little I've heard, the Japanese have lost twice as many Mars satellites as Russia.

However, and I at present do not recall the source, read where they said one of the heat sensors from the Japanese satellite had a huge spike just before it went dormant. Possibly indicating it was neutralized.

Yes, WTF! Was exactly my take on this Phobos mission, too. I did remember the fate of the Japanese satellite in the weeks before the launch. So when things soured, that was my response.

I just hope it comes down where it will do minimal damage.

Staff member
Wait -- I live in a cave, obviously -- has this happened yet? You guys make it sound like it's already over and done, but this mission has yet to occur, right?

Nope, it went up earlier this week and never broke orbit. The batteries have run down and it is heading back to terra firma later this month, early next month.

do you ever dream you're someone else?

After reading some on the whole "how NASA filters everything long before humans see it" -- and seeing some of the old transcripts of ham radio pickups in the old days -- I'm kind of to the point of believing absolutely nothing. About anything. By anybody. Someone tells me they went to a moon and turned around, I figure (a) they might be lying, or (b) maybe they really just went there to send in a couple tiny probes, great cover!, or whatever.

I'm getting cynical. Dammit! I really like being a pollyanna.

Hmm . . . very interesting thinking of all the Mars & other missions that have never reached their destination. To me it seems very suspicious that locations that may have alien activity are "off limits" to pesky interfering humans.

Wasn't this an mission target at one point? I came up with the symbol of the Grail, also the name of a space project "Grail", oh what a coincidence
T

Is Phobos a mined asteroid? This is quite a tale.

Good article but not in depth, they've actually been able to map the cavities within Phobos. Not so likely a mined out moon as an artificial space craft. Sounding tests show it is pretty well hollowed out.

There were images of a large craft appoaching the moon on Internet.

Too much speculation and supposedly NAZA is the only military power to get to Mars successfully.

Probably the darn bots they've sent are in South America somewhere and they're just feeding us the same BS they did with the Apollo Astro-not program.